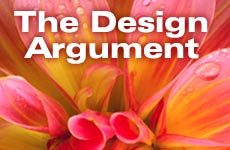 Does the intricate design of the universe serve as evidence for the existence of God?
by Rabbi Nechemia Coopersmith

Imagine walking in the desert and coming across two small stones in close proximity to each other. Most probably, you would think nothing of it. Two stones randomly sitting beside each other is no big deal.

You continue your walk in the desert and stumble upon three rows of stones piled up in a brick-layer fashion. Chances are you would quickly surmise that someone was here and arranged these stones in this manner. It didn’t just happen.

You continue your walk and happen to find a watch lying in the middle of the desert. Would you suspect that a windstorm somehow threw these pieces together and randomly created a watch?

Somebody made that watch. It didn’t just happen. Design implies designer.

DID THE UNIVERSE HAVE A DESIGNER?

The intricacy of design in our world is staggering — infinitely more complex than a simple brick wall or a watch. Dr. Michael Denton, in his book “Evolution: A Theory in Crisis” describes the intricate organization of nerve cells in the brain [pp. 330 – 331].

It is hard to imagine the multitude that 1015 represents. Take half of the United States, which is 1 million square miles, and imagine it being covered by forest, with 10,000 trees per square mile. On each of the 10,000 trees, which are on each of the one million square miles, there are 100,000 leaves. That’s how many connections are crammed inside your brain. And they’re not just haphazardly thrown together. They form an incredibly intricate network system that has no parallel in the industrial world.

Imagine walking by that in the desert! The natural response when perceiving design of such mind-boggling complexity is to conclude that there must be a designer behind everything who created it. None of this just happened.

Rabbeinu Bachya, in his major philosophical work “The Duties of the Heart” [10th century] presents this argument in the following manner:

Do you not realize that if ink were poured out accidentally on a blank sheet of paper, it would be impossible that proper writing should result, legible lines that are written with a pen? Imagine a person bringing a sheet of handwriting that could only have been composed with a pen. He claims that ink spilled on the paper and these written characters had accidentally emerged. We would charge him to his face with falsehood, for we could feel certain that this result could not have happened without an intelligent person’s purpose.

Since this seems impossible in the case of letters whose formation is conventional, how can one assert that something far subtler in its design and which manifests in its fashioning a depth and complexity infinitely beyond our comprehension could have happened without the purpose, power, and wisdom of a wise and mighty designer? (“The Duties of the Heart,” The Gate of Oneness, Chapter 6)

The two most common objections to this argument go as follows:

The principle “design implies designer” applies across the board, whether the designer is a Bedouin nomad piling rocks in the desert or the Infinite Source of all existence. Intellectually it is the same logical process. In fact, there is more reason to assume a designer in the latter case since the level of design is much higher.

Simplicity is not an inherent fault in an argument. Perhaps the reason why some people take issue with this application of logic is due to the accompanying consequences.

Since the Bedouin doesn’t make any moral demands on our life, there is no resistance to drawing the logical conclusion that someone designed that rock formation. But when the conclusion points to God, cognitive dissonance kicks in, creating an instinctive opposition to what one perceives to be threatening. [See the previous article in this series: “Seeing the Elephant”

When the interference of cognitive dissonance is removed, what is the objective standard of design that we need to see in order to conclude something was created? What we need is a control experiment that determines this threshold of design in a case that has no threatening consequences. “The Obvious Proof”, a book by Gershon Robinson and Mordechai Steinman, delivers a compelling presentation of the design argument, and describes such a control experiment involving millions of people concluding the necessity of a designer.

The laboratory consisted of theaters across the globe that showed the film “2001: A Space Odyssey.” In the film, American scientists living in a colony on the moon discover during a dig the first evidence that intelligent life exists on other planets. What did they find? A simple monolith — a smooth, rectangular slab of rock. The Americans keep this significant discovery secret, afraid of the widespread culture shock and social ramifications this would have without proper preparation.

Thousands of film critics and millions of moviegoers went along with the film’s basic assertion, agreeing that intelligent creatures other than man must have created this smooth, rectangular monolith. It didn’t just randomly appear. Free from all emotional and intellectual bias, in the comfort of darkened theaters with popcorn in hand, people unanimously agreed that a simple, smooth slab with a few right angles was conclusive proof of intelligence.

When the conclusion does not point to God, everyone realizes that the simplest object can serve as the threshold of design, the point at which one concludes an object could not have come into existence by random accident. The universe, infinitely more complex than a monolith, had to have been created.

WHAT ABOUT RANDOM EVOLUTION?

Given enough tries over a long period of time, isn’t it possible for complex structures to emerge randomly? After all, with sufficient trials even improbable events eventually become likely.

Robert Shapiro, a professor of chemistry at New York University, uses a national lottery to illustrate this point [“Origins”, Bantam, p.121]. The odds of winning the lottery may be 10 million to one. Winning would be incredibly lucky. But if we were to buy a lottery ticket every day for the next thirty thousand years, a win would become probable, (albeit very expensive).

But what are the odds of life coming about by sheer chance? Let’s take a look at two examples to get a sense of the odds involved in random evolution.

Physicist Stephen Hawking, writes in his book “A Brief History of Time”:

It is a bit like the well-known horde of monkeys hammering away on typewriters — most of what they write will be garbage, but very occasionally by pure chance they will type out one of Shakespeare’s sonnets. Similarly, in the case of the universe, could it be that we are living in a region that just happens by chance to be smooth and uniform?

Well could it be?

In response to Hawking, Dr. Gerald Schroeder, a physicist, calculated the odds of monkeys randomly typing an average Shakespearean Sonnet in his book “Genesis and the Big Bang.” He chose the one that opens, “Shall I compare you to a summer’s day?”

There are 488 letters in the sonnet … The chance of randomly typing the 488 letters to produce this one sonnet is one in 26 to the 488th power, or one in 10 to the 690th power. The number 10690 is a one followed by 690 zero’s! The immense scale of this number is hinted at when one considers that since the Big Bang, 15 billion years ago, there have been only 10 to the 18th power number of seconds, which have ticked away.

To write by random one of Shakespeare’s sonnets would take all the monkeys, plus every other animal on earth, typing away on typewriters made from all the iron in the universe, over a period of time that exceeds all time since the Big Bang, and still the probability of a sonnet appearing would be vanishingly small. At one random try per second, with even a simple sentence having only 16 letters, it would take 2 million billion years (the universe has existed for about 15 billion years) to exhaust all possible combinations.

Robert Shapiro cites Nobel laureate Sir Fred Hoyle’s calculation of the odds of a bacterium spontaneously generating [p.127]. At first Hoyle and his colleague, N. C. Wickramasinghe, endorsed spontaneous generation, but reversed their position once they calculated the odds.

A typical bacterium, which is the simplest of cells, is made up of 2,000 enzymes. Hoyle and Wickramasinghe took the probability of randomly assembling one enzyme and multiplied that number by itself 2,000 times to calculate the odds of a single bacterium randomly coming together. Those odds are 1 in 1040,000. Hoyle said the likelihood of this happening is comparable to the chance that “a tornado sweeping through a junk-yard might assemble a Boeing 747 from the materials therein.”

These are the odds of just a single, simple cell, without which evolution cannot even get started. Never mind the odds of more advanced compounds like an organ or all the enzymes in a human being.

The improbability involved in generating even one bacterium is so large that it reduces all considerations of time and space to nothingness. Given such odds, the time until the black holes evaporate and the space to the ends of the universe would make no difference at all. If we were to wait, we would truly be waiting for a miracle.

For all intents and purposes, an event with the probability of 1 in 1040,000 qualifies in real-world terms as impossible.

SOME THINGS ARE IMPOSSIBLE

Imagine you are the presiding judge over a murder trial. Ballistic tests match perfectly with a gun found in the possession of the accused. The odds of another gun firing the bullet that killed the victim are let’s say one in a billion.

The defendant claims that it is a sheer fluke that his gun happens to match the ballistics tests and that there must be another gun out there that is the real murder weapon. “After all,” he says, “it is a possibility.”

The defendant’s fingerprints are found all over the victim’s body. He claims there must be another person out there who happens to have astonishingly similar fingerprints. Again, it is possible.

You are the judge, and you need to make a decision. What do you decide?

In the pragmatic world of decision-making, odds this high are called impossible. One needs to weigh the evidence and come to the most reasonable conclusion.

Does the universe have a Creator? Look at the design, look at the odds and look honestly within. Where does the more rational conclusion lie?

One thought on “The Design Argument”