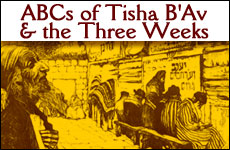 The Jewish national period of mourning

The “Three Weeks” between the 17th of Tammuz and the Tisha B’Av have historically been days of misfortune and calamity for the Jewish people. During this time, both the First and Second Temples were destroyed, amongst other tragedies.

During this time, various aspects of mourning are observed by the entire nation. We minimize joy and celebration – no weddings are held, we do not listen to music, nor are there haircuts or shaving. The expressions of mourning take on greater intensity as we approach the day of Tisha B’Av.

Since the attribute of Divine judgment (“din”) is acutely felt, we avoid potentially dangerous or risky endeavors.

On Shabbat during the Three Weeks, the Haftorahs are taken from chapters in Isaiah and Jeremiah dealing with the Temple’s destruction and the exile of the Jewish people.

Agonizing over these events is meant to help us conquer those spiritual deficiencies which brought about these tragic events. Through the process of “teshuva” – self-introspection and a commitment to improve – we have the power to transform tragedy into joy. In fact, the Talmud says that after the future redemption of Israel and the rebuilding of the Temple, these days will be re-dedicated as days of rejoicing and festivity.

The story is told of Napoleon walking through the streets of Paris one Tisha B’Av. As his passed a synagogue he heard the sounds of mourning and crying. “What’s this all about?” Napoleon asked. An aide explained that the Jews were in mourning the loss of their Temple. “When did this happen?” Napoleon asked. The aide replied, “About 1700 years ago.” Napoleon said, “Certainly a people which has mourned the loss of their Temple for so long, will merit to see it rebuilt!”

The beginning of a 3-week period of mourning is the 17th of Tammuz, a fast day commemorating the fall of Jerusalem, prior to the destruction of the Holy Temple.

On the 17th of Tammuz, no eating or drinking is permitted from the break of dawn until dusk. (Should the day coincide with Shabbat, the fast is delayed until Sunday.)

Five great catastrophes occurred in Jewish history on the 17th of Tammuz:

The period commencing with Rosh Chodesh Av is called the “Nine Days.” During this time, a stricter level of mourning is observed, in accordance with the Talmudic dictum (Ta’anit 26): “When the month of Av begins, we reduce our joy.”

During this time the additional “signs of mourning” include abstaining from meat and wine (except on Shabbat) and from doing laundry or wearing freshly laundered clothes (except on Shabbat). We also do not bathe for pleasure, though it is permitted to bathe in cool water in order to remove dirt or perspiration. For more details, see “The Three Weeks.”

Tisha B’Av – The Ninth of Av

Other grave misfortunes throughout Jewish history coincided with the Ninth of Av, including theexpulsion from Spain in 1492, the outbreak of World War One in 1914, and the mass deportation of Jews from the Warsaw Ghetto in 1942.

During the late afternoon prior to Tisha B’Av, it is customary to eat Seudah Hamaf-seket – a meal consisting only of bread, water and a hard-boiled egg. The food is dipped in ashes, symbolic of mourning, and eaten while seated on the ground. (The rules are slightly different when Tisha B’Av falls on Shabbat or Sunday.)

Sundown marks the commencement of Tisha B’Av, where no eating or drinking is permitted until nightfall the following evening. It is also forbidden to bathe or wash, wear leather shoes, or engage in marital relations. We also do not learn Torah, except for texts relevant to Tisha B’Av and mourning — e.g. the book of Lamentations and Job, and certain sections of the Talmud (including the story of Kamtza and Bar Kamtza).

The Book of Eicha (Lamentations), Jeremiah’s poetic lament over the destruction of Jerusalem and the First Temple, is read in the synagogue as part of the evening service. Special “Kinot” (elegies) are also recited, both at night and during the day.

Other mourning practices include sitting on a low chair (after midday, a regular chair permitted; see “Laws of Shoes and Chairs”). We also minimize business and leisure activities.

Following Tisha B’Av, all normal activities may be resumed, except for the following which are delayed until midday of the 10th of Av, because the burning of the Temple continued through the 10th of Av: haircuts, washing clothes, bathing, listening to music, and eating meat and wine.