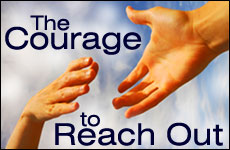 You never know the impact you can make until you try.

Many individuals are apprehensive about reaching out to a non-affiliated Jew, and even shy away from the challenge. Some are opposed to doing so in principle, rejecting the idea of contact with a world from which they have purposefully distanced themselves and their families for their own protection. Many feel they will not know how to relate to others who are so very different from themselves and feel ill-equipped to address questions and challenges about Jewish belief and practice that are posed by their unaffiliated brethren. Some are afraid that they will meet with unpleasant reactions; still others see kiruv as reserved for professionals who have special training and know-how, or other kinds of people who are “more the type.”

Yet, the many inspiring stories about the simple and respectful gestures of caring religious Jews reaching out to their brethren show that many of these concerns are groundless. Believe it or not, we – you and I – can bring millions of those lost back home to HaKadosh Baruch Hu. How can we not begin?

Read on for the remarkable story of one young woman who did.

A Story of Chizuk and Inspiration

Chana* had gone to Eretz Yisrael with her family during the summer following eleventh grade. She was looking forward to her senior year, when she would apply to seminaries in Eretz Yisrael. What a generous gift from her parents, never to be taken for granted, common as it might be these days.

While Chana was riding a bus in Yerushalayim, two chareidi women were talking with animation. Chana didn’t intend to eavesdrop, but she could not help overhearing their conversation.

A non-observant family had moved into her building, complained one woman to her friend. Why they would choose to live among the “ultra-Orthodox” was a mystery, and something of an affront as well. What would it be like seeing the frei mother, father and children going about their lives, with such profoundly different values, ways and appearances? What unpleasantness might they anticipate from people whose life was at tremendous odds with theirs, and who undoubtedly looked upon chareidim with hostility and contempt? And what about the children? The woman was clearly upset and terribly worried that the presence of these people would threaten her family’s way of life, with its many gedarim (protective fences) that she and her husband had worked hard to build. Chana listened. She didn’t have a lot of kiruv exposure in her background. Yes, she had volunteered for a local program that year, teaching the basics of Judaism to young children from assimilated families one evening each week, and she had worked earlier in the summer at the program’s kiruv camp, but she had not been deeply involved in outreach.

To this day, she does not know what made her do it. Suddenly, she found herself speaking. She was very embarrassed, but forged ahead.

“I don’t think it is my place to say anything, and I realize you are upset with the whole situation with your new neighbors, but perhaps they behave the ways they do because they were never shown a different way of life, or the beauty of Yiddishkeit. Perhaps if you would show them…”

The women were surprised and a bit bewildered. They looked at Chana skeptically, with just a touch of pity in their expressions.

The woman who was complaining about her new neighbors responded, “Mammele, you are young and na�ve. You have no idea how deep the animosity runs from the chilonim to the chareidim. They would surely scorn an invitation from me. And besides, how could I go out and tell them to do things differently when I am not a perfect person myself? How can I tell them what to do, when I still have things to work on?”

Providentially, Chana remembered something she had learned. The words spilled out with ease.

At Agudath Yisrael’s first Knessiah Gedolah in the early 1930s, the Chofetz Chaim, zt”l, urged everyone to fulfill their obligation to do whatever they could to save their fellow Jews from the forces of assimilation that were raging through Europe during the era of “isms.” His urging met with protest. “How we can tell others to do what we haven’t perfected ourselves?”

The Chofetz Chaim responded with a mashal. A traveler was invited by a wealthy man to have a cup of tea. When the guest looked into his cup, he saw sediment that had settled on the bottom. “Where is your water from?” he asked. When told that the town’s water came from a local river, he advised his host that the town needed a filtration system. The system was installed, and thereafter, the water was crystal clear. It worked well until a huge fire broke out some time later and burned down half the town.

The next time the traveler was in town, he heard what had happened and inquired, “Couldn’t you put out the fire?” The people replied, “It took a long time for the water to work its way through the filtration system, and there wasn’t enough filtered water available to quickly control the flames.”

“Fools!” said the traveler. “You don’t need filtered water to put out a fire!”

The Chofetz Chaim went on to explain to those who resisted his call to outreach, “There is a fire raging in Klal Yisrael. Just go out and do whatever you can to stop it.”

The ladies listened politely. They exchanged pleasantries, asking Chana her name and where she was from, and parted company pleasantly.

Chana questioned whether she had done the right thing, even though it had seemed right at the time.

Months passed. One night shortly after Sukkos, Chana heard a voice in a thick Israeli accent when she answered the ringing telephone.

“Is this the home of Chana Freund?”

“Yes, Chana speaking. How may I help you?”

“My name is Giveret Klapchuk from Yerushalayim. I don’t know if you will remember me, but I am so happy I found you. Last summer, I met you on a bus. You overheard my conversation about our new chiloni neighbors …”

“Oh, yes,” replied Chana, the memory rushing back, along with the color in her cheeks. “How ever did you track me down?” she asked tentatively.

“Baruch Hashem, I remembered that you said you lived in Brooklyn, and I kept calling all the telephone numbers for ‘Freund,’ until I found you.”

Chana was amazed and curious.

“At first I was taken aback – a young American girl speaking up as you did. But I thought about what you said, and I decided to try. I invited the family for that Shabbos and, baruch Hashem, they have been coming to us every Shabbos since. They have kashered their kitchen. They took their children out of chiloni schools and enrolled them in a Shuvu school. The family is growing in Yiddishkeit, and I wanted you to know.”

Does this story sound extraordinary? It is.

Can such a story become “ordinary”? Yes, it can!

But stories like this can only become “ordinary” by our sustained efforts.

Their story can become our story. We need only begin, as the Torah teaches us, and Hakadosh Baruch Hu will send us siyatta diShmaya. The outcome is His, but the hishtadlus is ours.

* Names and other personal information have been changed to protect the privacy of the individuals in this story.

One thought on “The Courage to Reach Out”